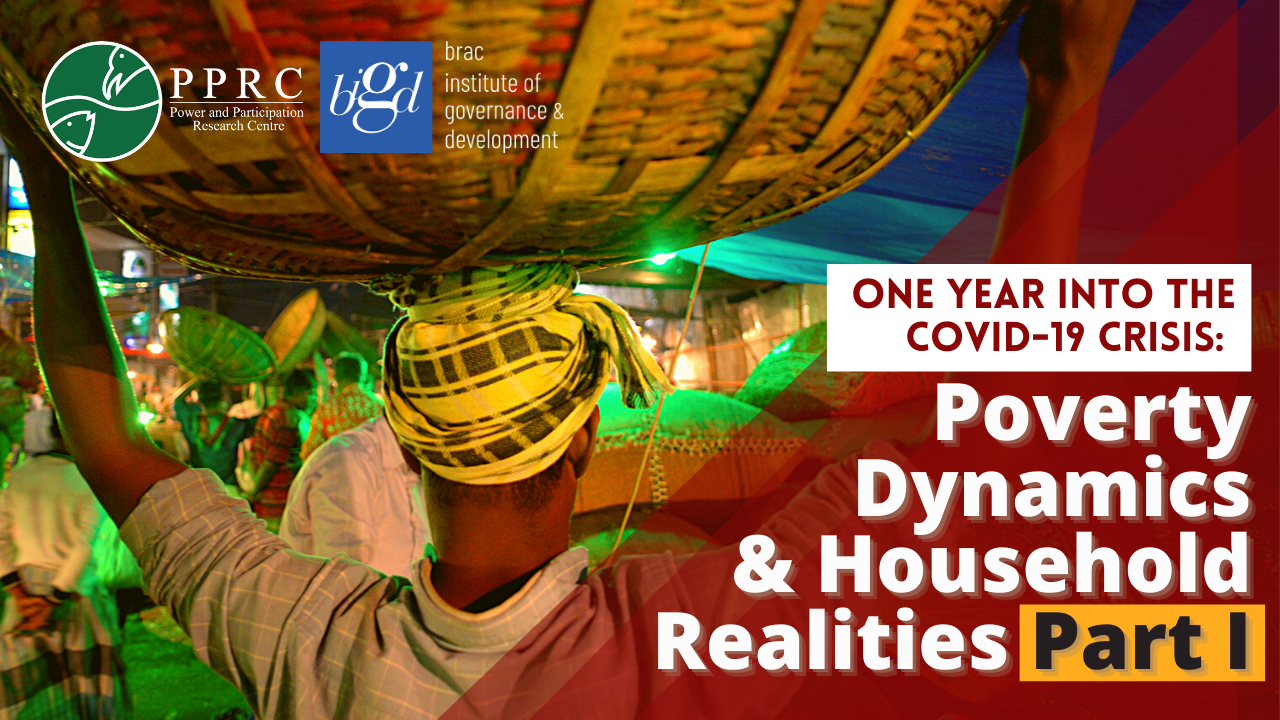 One year into the Covid-19 pandemic, the poor across Bangladesh are still struggling with their livelihoods and facing emerging vulnerabilities, like mounting debt and dwindling savings. Specially, the situation of the urban slum dwellers is dire. Power and Participation Research Centre (PPRC) and BRAC Institute of Governance and Development (BIGD) jointly conducted a national three-phase rapid telephonic survey between April 2020 and March 2021 to capture the changing poverty impact of the Covid-19 health and economic crisis on low-income communities. According to the findings from the third phase survey titled ‘Poverty Dynamics and Household Realities’, with a sample of 6,099 households, per capita income in urban slums is still 14% below pre-Covid levels. Dr Hossain Zillur Rahman, Executive Chairman of PPRC, and Dr Imran Matin, Executive Director of BIGD, presented the findings in a webinar hosted on 20 April, where they highlighted the evolving poverty dynamics and vulnerabilities in Bangladesh.

Among the economically vulnerable groups—namely the extreme and moderate poor, two groups below the poverty line, and the vulnerable non-poor or VNP, the group above the poverty line but below median national income—household incomes of the VNP have recovered the slowest. Last June, the study found that the income of 72% of the VNP had sunk below the poverty line, who were then identified as the new poor. The percentage of new poor among the VNP is 50% at present, 59% in urban slums and 44% in rural areas. The study estimated that the new poor constituted 21.2% of the national population in June, now they constitute 14.8%, still a staggering number.

Employment scenario has improved from June, yet eight percent of those who were employed before COVID are currently out of work. The trend is particularly concerning for women – a third of the women employed before COVID have remained unemployed since June. In contrast male unemployment came down from 16% to 6%. In addition to unemployment rate among female-headed households being five times higher than men, women also face greater re-entry constraints into labour markets creating a double burden.

Besides low income and unemployment, the nature of employment recovery has become a major cause of concern. More than a third of those employed before COVID had to change their occupation. The study finds that the majority have moved to unskilled labour, for example, day labour, from better occupations like skilled labour, salaried jobs, and factory work.

Dr Imran Matin remarked that the persistently high unemployment rate among women, caused by COVID, can push many women out of the labour market, a grave outlook in a country where women’s labour force participation is already low. He also pointed out the large shift to more vulnerable occupations like day labour is increasing the livelihoods vulnerabilities of the poor.

In fact, only the agriculture sector has seen positive net growth in income from pre-Covid levels. The dire state of income opportunities in the cities is probably why migration from urban slums has been the most extreme. A total of 27.3% of urban slum-dwellers have migrated in the last year, of which 9.8% have not yet returned.

While incomes have remained lower than pre-COVID levels, expenses such as non-food costs have doubled from June. This reality is particularly harsh for the urban poor, most of whom live in rented houses.

Unsurprisingly, savings have dwindled for everyone. Particularly for the VNP and non-poor, saving has remained substantially lower than pre-COVID levels. At the same time, debt has almost doubled across all groups. This means, with the onset of the 2nd wave of Covid-19 fragile recovery is coupled with significantly depleted household coping capacity.

Dr Hossain Zillur Rahman said, “Although social protection is playing only a token role in covid response it is a critical priority. Parallel to existing safety nets, there is urgent need for specific new and significant programs for urban poor and ‘new poor’ with effective targeting and leveraging technology.” He further added, “‘Smart’ lockdown to avoid such a new income shock is both a health and an economic priority.”

As a final policy message, Dr. Rahman emphasized that to tackle women and ‘new poor’ caught in an emerging poverty trap due to vulnerability of the ‘meso-economy’ including CSME sector, a targeted and ‘big-push’ is necessary for which the study calls for an urgent national CSME recovery action plan.

Other noted researchers and journalists were present at the press conference.