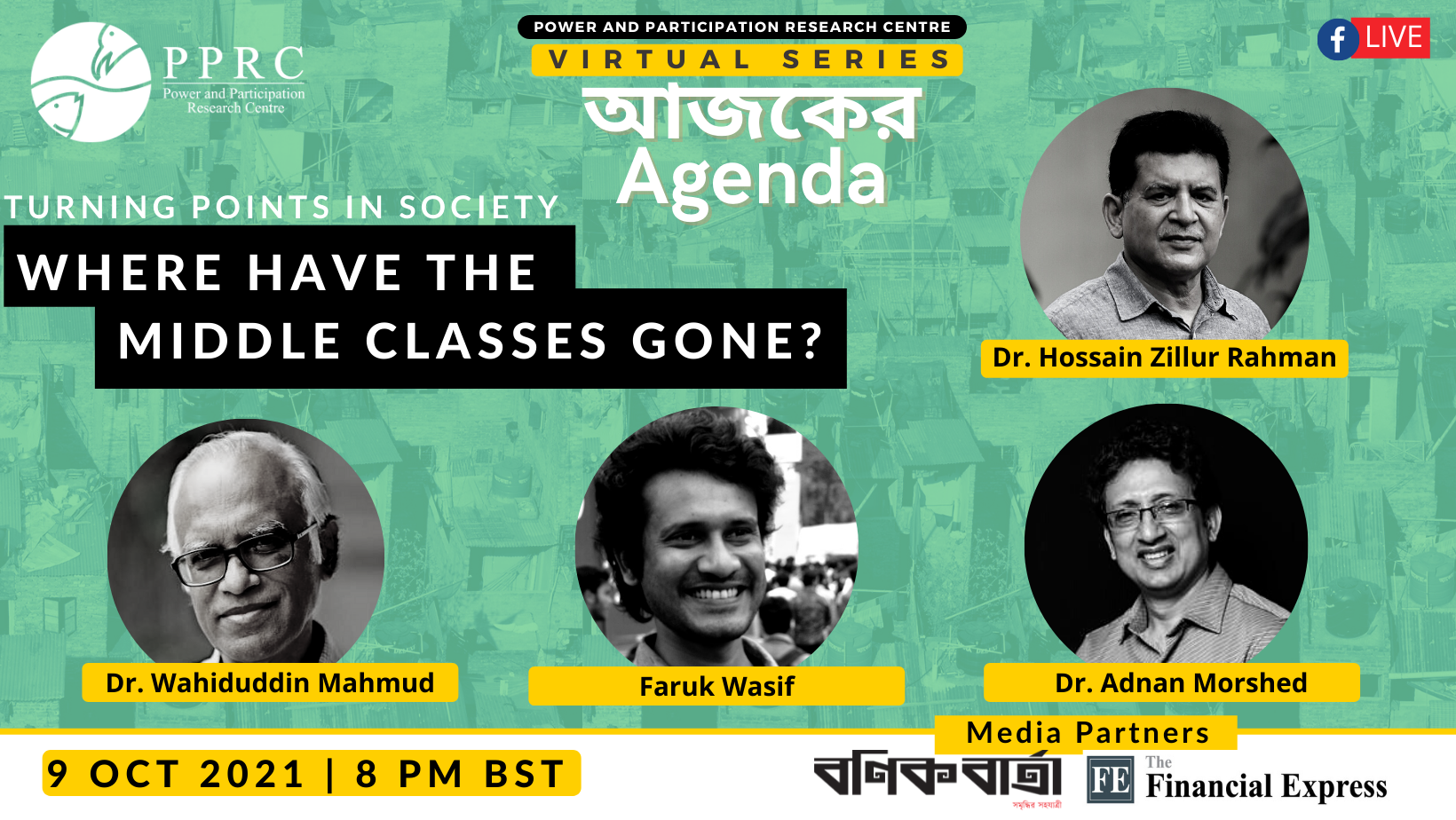 “The anxiety of the middle-classes drives their life strategies. Being empirical is essential to understand the dynamics of the anxiety-driven precarious class.”

A middle-class constitutes a significantly large portion of the entire population. According to the Bangladesh Bureau of Statistics (BBS), Bangladesh’s population is over 160 million. There are 40 million people in the middle class, accounting for 25% of the total population. Turning the pages of history, their roles in intellectualism, socio-cultural activities, political leadership, and as the vanguard of political change are irrefutable. Despite the surge in the number of the middle-class over time, their active presence in the aforementioned roles has plummeted. Has the intellectual middle-class waned, become inactive, or has it grown weak?

While the initial discussion centered on the identity and roles of the middle class, it gradually evolved to provide diverse interpretations of the title. Economist Dr. Wahiduddin Mahmud mentioned that the poverty rate in Bangladesh has been declining rapidly for the last 20-30 years while the size of the middle-classes has increased. Currently, the middle-class is less interested in participating in intellectualism due to various reasons such as “degradation of education quality, the brain drain from the country, and the proclivity of becoming wealthy without proper education,” suggested Professor Wahiduddin Mahmud. He further added that the culture of rising to the affluent class with the help of politics of patronage and favoritism is alarming. “Even in the presence of material economic development, a society is not fully developed without mindfulness and morality in intellectual practice.” He emphasized the importance of public reasoning, a part of middle-class intellectual practice, to mitigate the predicament.

The middle-classes are somewhat confused, believes Professor Adnan Morshed. He further explained that everyone in civil society is running towards personal wealth, and in the mad rush, the middle class has lost its identity. A robust discussion on the type of future we envision for our society is vital, prior to our discussion on a decent middle-class.

Emeritus Professor at the Bangladesh Agricultural University (BAU), Dr. M A Sattar Mandal centered his brief discussion on the rural middle class. Dr. Mandal highlighted agrotechnology as one of the key drivers of the rural class, which is giving rise to a new agro-entrepreneur-based middle class with adequate technical knowledge.” There is also an emergence of a new middle in the cities due to the transfer of resources from the rural to the urban areas, children’s education, medicare, and legal services, he added.

Research Director of BIDS, Dr. Binayak Sen highlighted the significance of the unification of the middle class, farmers, and workers in order to build a new society stating the successful coalitions with the workers and peasants that the middle class has made throughout all the social changes.

Dr. Hossain Zillur Rahman concluded the session, emphasizing the importance of being empirical to understand the dynamics of the middle-classes.