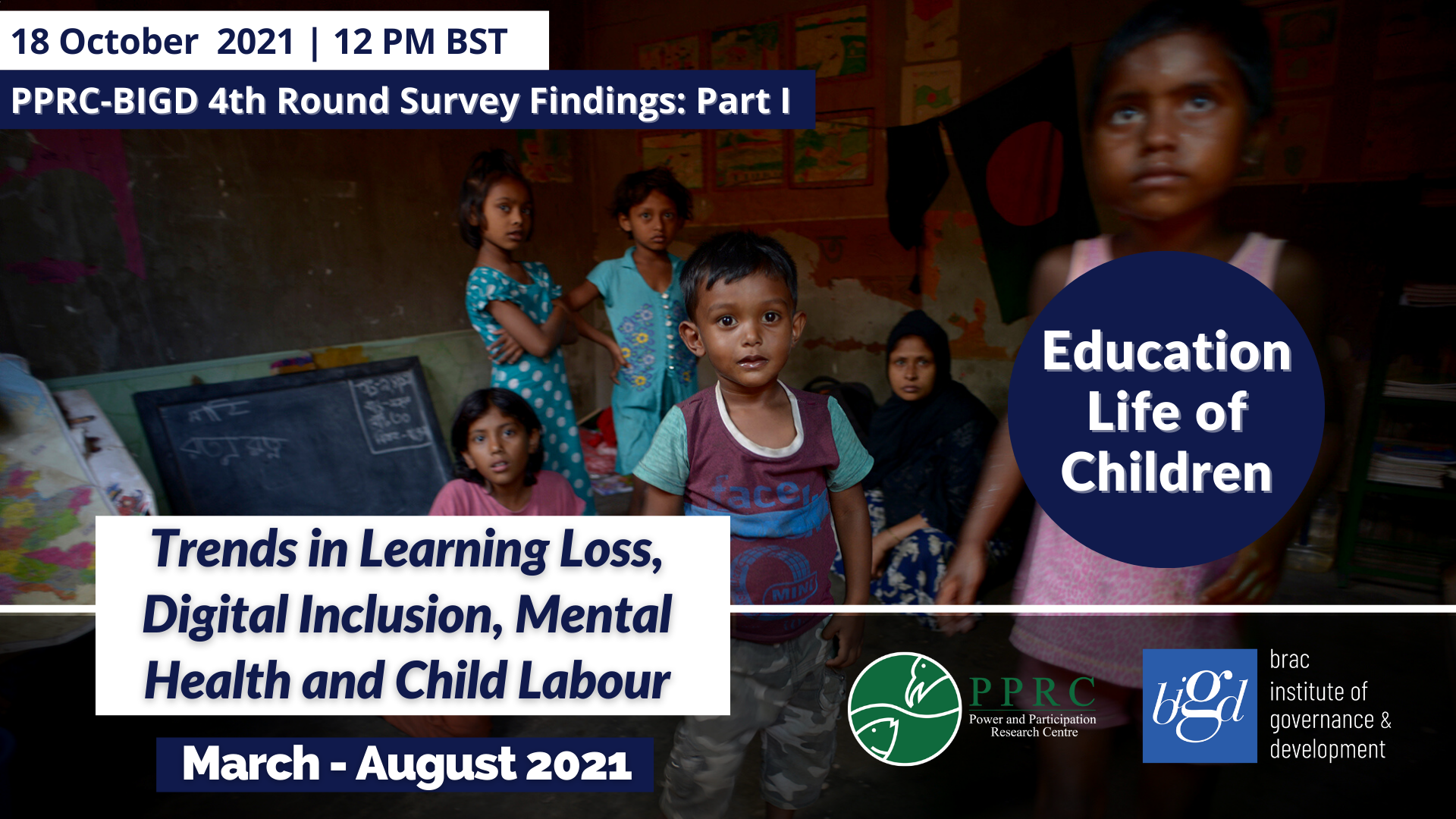 The learning crisis triggered by the pandemic—a consequence of a long, nationwide school closure—has worsened considerably in the past six months. Findings from a recent national survey in rural areas and urban slums show that at least 22% of primary and 30% of secondary students are currently at risk of learning loss due to school closure.

The survey is part of a larger, multi-phase study by Power and Participation Research Centre (PPRC) and BRAC Institute of Governance and Development (BIGD): COVID-19 Livelihoods and Recovery Panel Survey. The research developed an educational module as part of the larger survey —first in March 2021 and later in August—to examine the changes in the educational life of children. The timing of the study provides a good baseline for school reopening realities.

In the survey, many children reported not studying at all, self-studying without supervision, studying irregularly via online classes, or studying with family members or private tutors. The researchers identified these children to be at risk of learning loss.

From March to August 2021, there is a worrying upward trend in learning loss risk among both primary and secondary school-children across income groups and both in rural areas and urban slums. The trend is most pronounced among secondary male students; 26% were at risk of learning loss in March, which jumped to 34% in August.

Main modes of distance learning—pre-recorded classes on TV and online and real-time online classes—were used by a very small fraction of students in both periods. While 56% of primary and 65% of secondary students received private tutoring/coaching in March, the rate declined to 48% and 43% in August. Family support in studying also decreased significantly since March, particularly for secondary students, most likely due to the resumption of activities and livelihoods pressures. However, the hybrid method of assignments (a mix of interactive and non-interactive) became the most widely adopted distance-learning tool in August. Yet only 18% of the primary students and 38% of the secondary students were learning through assignments in August. Students and teachers were in minimal contact during the survey period, interacting mainly when students came to collect assignments.

The PPRC-BIGD survey indicates that socioeconomic disparities play a role in the learning loss crisis. First, the survey finds a direct relationship between a child’s learning loss risk and their mother’s education level. For example, children whose mothers never went to school were at the highest risk. Second, students with access to coaching/private tutoring prior to the pandemic make up an overwhelming majority of those who can still afford and access it. Third, 44% and 36% of rural and urban slum households respectively did not have access to any electronic devices for online learning. Fourth, over eight percent of school-going boys were engaged in income-generating activities in both periods. The pandemic has exacerbated educational inequality, which was already a major concern in our country.

The pandemic and subsequent school closures have also adversely affected the mental health of children and adolescents. In August 2021, over 15% of households reported that school and college-going students have been suffering from mental health stress since the beginning of the pandemic. Parents reported that their children were more irritable and angrier and displayed more violent behavior during the school closure period (36% in March compared to 42% in August).

Dr Hossain Zillur Rahman, Executive Chairman of PPRC, and Dr Imran Matin, Executive Director of BIGD, presented these findings at a webinar today. Dr Hossain Zillur Rahman stressed that the human capital crisis has been as great a concern as the health and economic crisis of COVID-19. School opening alone without an off-hours remedial program cannot overcome the accumulated learning loss and danger of a drop-out generation. Dr Imran Matin observed the importance of funding innovative and scalable solutions to address the twin risks of learning loss and mental health to tackle the educational emergency. “The long-term cost of not treating this as an emergency can be extremely high, off-tracking years of progress and ambition,” he emphasized. Noted journalists and media persons were present at the online press conference.

Understanding the Plight of Day Laborers in Dhaka